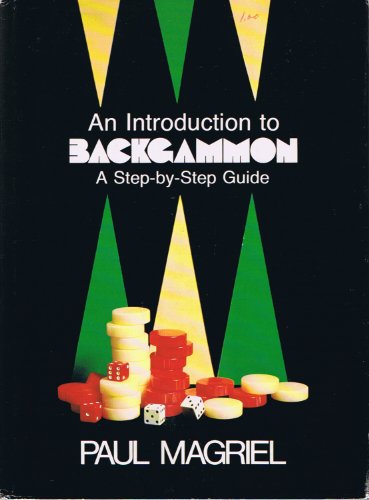 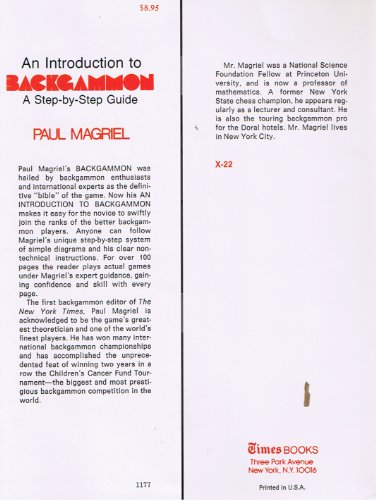 An Introduction to Backgammon: A Step-By-Step Guide

Paul Magriel’s BACKGAMMON was hailed by backgammon enthusiasts and international experts as the definitive “bible” of the game. Now his AN INTRODUCTION TO BACKGAMMON makes it easy for the novice to swiftly join the ranks of the better backgammon players. Anyone can follow Magriei’s unique step-by-step system of simple diagrams and his clear nontechnical instructions. For over 100 pages the reader plays actual games under Magriel’s expert guidance, gaining confidence and skill with every page. The first backgammon editor of The New York Times, Paul Magriel is acknowledged to be the game’s greatest theoretician and one of the world’s finest players. He has won many international backgammon championships and has accomplished the unprecedented feat of winning two years in a row the Children’s Cancer Fund Tournament- the biggest and most prestigious backgammon competition in the world. Mr. Magriel was a National Science Foundation Fellow at Princeton University, and is now a professor of mathematics. A former New York State chess champion, he appears regularly as a lecturer and consultant. He Is also the touring backgammon pro for the Doral hotels. Mr. Magriel lives in New York City.

Backgammon: From Basics to Badass

Backgammon for Blood: A Guide for Those Who Like to Play but Love to Win